Louisiana State University is the flagship institution of the state of Louisiana and is one of only a handful of universities nationwide holding land-grant, sea-grant and space-grant status. All LSU employees play a critical role in achieving success in classrooms, communities, and offices and fostering an environment to support Louisiana State University’s mission of providing a world-class education and successful student development. Join our team of Award-winning Faculty and Staff, who have been making a global impact, both inside and outside of the classroom, since 1860! LSU holds a prominent position in American higher education. As you enter LSU, you are joining a vibrant, diverse and rewarding community, one with a rich culture and history and even brighter future. 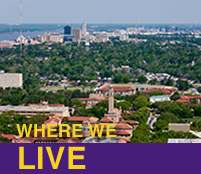 Situated on the Mississippi River, Baton Rouge represents the best of Louisiana's vibrant culture. Known for its great people, its unique food and its lively music, the Red Stick has something for everyone. 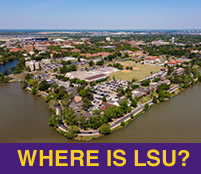 Baton Rouge is the capital city of Louisiana. The city of Baton Rouge is located just an hour away from the majestic city of New Orleans, which is known all over the world for its music, culture and cuisine.

LSU represents the largest institution of higher education in the state of Louisiana and is the only public university in the state to be designated a Carnegie Research University with Very High Research Activity. Among a handful of distinguished universities to enjoy land, sea, and space-grant status, LSU offers vital research opportunities for graduate and undergraduate students as it transforms new technology into an enterprise and lends expertise to solve endemic problems. Guided by the foundation of the National Flagship Agenda, Flagship 2020 is focused on the goals of learning, discovery, diversity, and engagement. Among institutions of higher education, LSU is uniquely situated to provide a rich educational experience. Our success as the Flagship campus has been attained not only by harnessing the intellectual capital of our faculty and students but also by exploiting the geographic and cultural capital found only in Louisiana.

In the 2019 edition of U.S. News & World Report’s Best Colleges, LSU is ranked in the top tier for “Best National Universities” for the 11th-straight year and is the only public university in Louisiana ranked in the top tier this year. LSU is ranked 70th among public universities and 35th among flagship universities nationwide. The university also appeared on U.S. News & World Report’s list of “A-Plus Schools for B Students,” and the 2018–19 issue of “America’s Best Architecture & Design Schools” ranked LSU’s undergraduate program as number one in the nation. With LSU's colleges being profoundly ranked, LSU Department of Physics & Astronomy Professor Gabriela Gonzalez was named one of the top 10 scientists in the world and received the 2018 SURA Distinguished Scientist Award. LSU Manship School of Mass Communication’s Jinx Coleman Broussard, Ph.D. is the recipient of the 2018 Scripps Howard Foundation’s Teacher of the Year Award. The real value of a university can be seen in such measures as tuition rates, levels of student indebtedness, and career outcomes, and these are the important measures that parents and potential students need when making their college decisions.

In September 2015, LSU was ranked in the top tier for "Best National Universities" for the eighth straight year and is ranked 62nd overall among public universities. Using no state funds or student fees to support athletics, LSU has won 46 national championships and the football program has competed for three BCS National Championships since 2011. LSU Women's Gymnastics team has recently been awarded their first SEC Championship win since 1981. Visit LSUsports.net, the official website of LSU Athletics.

In addition to the prestigious LSU Tiger Athletics program, the University offers an array of recreational activities. From museums and award-winning theater to leisure classes and distinguished orators, LSU offers entertainment for everyone.